FEATURED
Why Chromebooks may be the future for schools?
Best Mobile Phone Apps for the Blind or...
Futuristic Features Coming Soon To Smartphones
How mobile phones technology is changing the society?
#BlueMonday: Beating those Monday blues with Laptop Outlet
How to post on Instagram from laptop: Windows...
Best phones under £400: High End Android Phones
Review: Lenovo Yoga Slim 7 14″ FHD Laptop...
OPPO Waterproof Phones
How to take a screenshot on a laptop...
Home BrandsSamsung The Foldable Smartphone: Latest News & Rumours about the Samsung Galaxy X
Samsung

Last week in Barcelona, Samsung wowed us with the official launch of the much-anticipated Samsung Galaxy S9 and Galaxy S9 Plus at MWC 2018. While we’re still overwhelmed by the two new smartphones, the Korean tech giant is already planning something even more exciting – the foldable Galaxy X! Samsung claims in its latest earnings report that it “will continue its efforts to differentiate its smartphones by adopting cutting-edge technologies, such as foldable OLED displays.” It seems that the company is nearing production of its long-rumoured pioneering handset. Read on to find out more about this ground-breaking gadget:

Reports suggest that the experimental Samsung Galaxy X was presented with a launch schedule during a private event at this year’s CES. Two models were reportedly shown in the behind-closed-doors showcase, an inward folding version and an outward folding one. However, no images have been leaked.

We know that the Samsung Galaxy X is going to be a foldable 2-in-1 phone and tablet, but we still can’t be sure how it exactly works. Samsung has previously demonstrated curved and bendable screens, but a foldable one is still yet to be displayed openly. 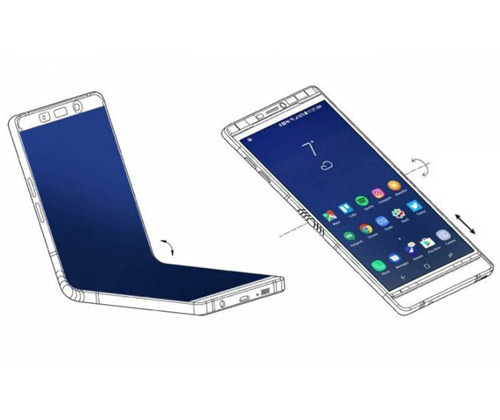 According to rumours, we’ll be expecting a 4K (3840 x 2160px) resolution. The 5-inch display could be folded out into a 7-inch mini tablet. The foldable phone could also come with a dual-camera at the rear. It is very likely that the phone is going to be powered by the latest Qualcomm Snapdragon 845 or Exynos 9810 processor, with minimum 6GB of RAM. There will probably be a microSD card slot and a non-removable battery.

In late 2016, Samsung applied for a patent that gives us some hints on how the Galaxy X may eventually look like. 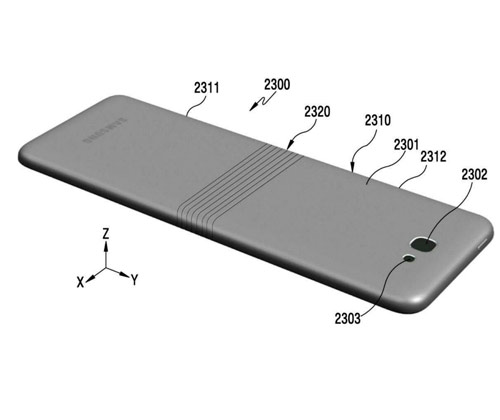 It is a hinged device with a design very similar to that of the Microsoft Surface Book, which suggests that there may be a similar small cavity when the phone is folded over. Nevertheless, it doesn’t change the fact that the Galaxy X is an unprecedented piece of smartphone technology!

When it comes to flexible OLED displays, Samsung is not the only player in the field. LG and Lenovo have demonstrated bendable displays and devices at a number of industry events. The two competitors have also registered multiple patents for the technology. LG even has curved OLED screens in production, which are used on its monitors, TVs and curved smartphones like the LG Flex. While LG may be taking the lead on the display side with its announcement of the 65-inch rollable OLED TV at CES 2018, it’s a brilliant strategy of Samsung to become the pioneer of foldable smartphones.

Samsung has confirmed that the foldable Galaxy X will be released in 2018, probably towards the end of the year. However, it is reported that this avant-garde gadget will only be available in a limited number of around 100,000 and exclusively in Korea, Samsung’s home nation. This quirky folding phone may be one of the hardest to bag in 2018!