Rumours of an upcoming MacBook Pro update have caused quite a stir on the tech scene. With the 13” and 15” MacBook models receiving their last upgrade in spring 2015, the launch of the iPhone 7 due this autumn and Apple’s market share for computing space falling by 4.9% in the second quarter of 2016, the release of a new and updated MacBook Pro is imminent. Apple’s refusal to mention or even hint at the update at their annual developer event in June has brand enthusiasts waiting in anticipation, intensified the excitement and has rumours circulating and spreading like wildfire! We’ll put your apprehension and curiosity at rest and tell you what you need to know.

What new features will the 2016 model have?

Especially well known for their elegant design, we expect no less with the soon to be released MacBook Pro. Appearance will see little to no change, the much loved design is a key part to the MacBook’s success, as well as ensuring its portability. With the current 13” model weighing 1.58kg and the 15” weighing 2.04kg, we’re expected to see a decrease in weight with the update; a plus considering the MacBook is reputable for its portability, now it’ll be lighter than ever. It’s debatable that we might also see a thinner upcoming model.

You’ve no doubt heard through the grapevine that the iPhone 7 is due to be released (if not check, out our article on the iPhone 7 to find out what to expect) and it’s been stated that we might see the death of the renowned earphone jack. Either to your happiness or despair, this too is an expected feature on the new MacBook Pro. You’ll either be provided with an adapter or have to purchase one separately which will allow you to plug your earphones in. This feature has understandably not been warmly accepted. If the adapter isn’t included in your purchase, it’ll be an extra cost and an extra hassle to carry and use.

Kick-starting the trend of finger-scanner security features in smartphones with the ever-so-loved iPhone, there is a strong likelihood that this feature will be added to the 2016 release. We’re expecting to see a dual-functional power button that’ll be used to start your MacBook and unlock it. You’ll be required to use your fingerprint as a password; enhancing security and much easier than having to manually enter a password. This advanced security feature surprisingly hasn’t been seen on laptops so far; again putting Apple on the forefront of innovative designs.

With the launch of the iPad in 2012 propelling the tablet phenomenon into the tech market, Apple have remained surprisingly aback from the current hybrid and touchscreen laptop craze. These innovative hybrid designs have become immensely popular and pretty much every other leading brand have released a device of some sort that fits into the category.

In the event of a hybrid device (more likely than a touchscreen laptop) we’ll reportedly see Apple maintain the appearance of the MacBook Pro but making unnoticeable and handy alterations. The MacBook Pro hybrid will bring the introduction of a newly designed hinge which allows you to detach the keyboard, and will use a mechanism that goes by the name of ‘metal injection moulding’, as well as the re-introduction of the butterfly-mechanism keyboards used on the 12” MacBook.

This new and innovative hinge is apparently being manufactured by Amphenol and sources have confirmed that the company is definitely supplying Apple with some form of equipment; so a hybrid is likely. It’s all very secretive; however Apple never disappoints so we are expecting good things if a hybrid were to be part of the new release.

With the upcoming release we expect a touchscreen laptop or a hybrid, but of course, Apple has a lot more in store than just that.

This is where Apple takes everyone by surprise and yet again blows us away with an innovative new tech device. Whilst we’ve seen devices such as the Nintendo DS and some smartphones use a stylus, they seem to have disappeared and become a little outdated with the ability to use a touchscreen device with our fingers. A patent primarily focusing on touchscreen display was filed in 2014 (now seen on the iPad Pro) and now there have been rumours and leaks of it being incorporated into the MacBook Pro. The likely release of this is going to be an absolute game changer and re-establish the stylus in a new and advanced form. 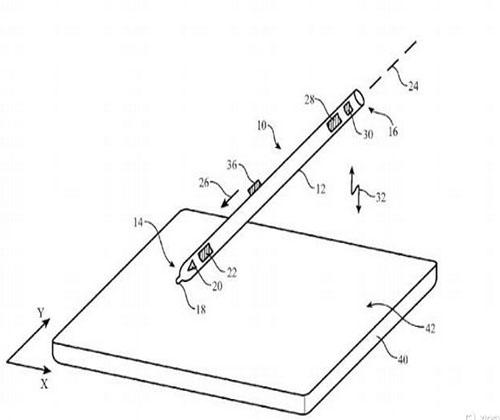 MacBook Pros and iMacs are prevalent in media industry due to their proficient features. A stylus release will see a more advanced version of what’s currently available. It’ll reportedly be able to detect 3D lateral movement, as well as tracking rotational orientation and movement. Greater detail and a finer finish when doing meticulous work, sketch, alter and refine with greater precision.

As seen in the diagram, we’re likely to have improved control and navigation with the addition of buttons on the Apple pencil, although we haven’t been informed or heard anything about their functionality.

A Keyboard with no buttons

It sounds absurd, but when explained, it’s most definitely achievable. Circulating rumours of no physical keys, simply a touch sensitive slate have been floating around online. Leaked pictures of the MacBook Pros upcoming components surfaced in late May, from which we can decipher a thinner body and the absence of keys altogether. Sounds a little familiar right? That’s because Apple patented the idea in 2011, so after years of waiting, we’re likely to finally see it.

We will possibly see the introduction of a keyboard that perhaps has more of a screen-like quality. Whilst some may think it’s absurd and far-fetched, it’s completely do-able, considering it’s somewhat seen on phones. You’ll have a slick-looking, flat surface showing all your normal letters, numbers etc. with the use of lights. We may also see the introduction of automatic contextual alteration, so buttons on the keyboard may change depending on the app in use. 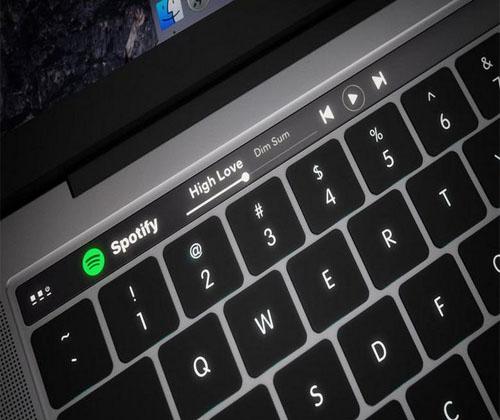 We’re going to see an undeniable improvement in graphics. Apple is famous for delivering in terms of visuals and with close ties to AMD and NVIDIA it’s looking like film fanatics are bound to be pleased. AMD and NVIDIA are planning on releasing new GPU products suggesting that there may be some new quality features too. There are widespread reports, as well as some sources confirming that AMD have a new design that’s exclusive to the new MacBook Pro.

Now, this feature is a tricky one. Whilst it’s been supposedly stated to be on the new MacBook Pro by various blogs and tech experts, it’s most likely not going to happen. Leaked patents and design blueprints suggest that in order to make such a feature possible, Apple would have to incorporate an external antenna into the laptop. With an external antenna we’re looking at a higher risk of damage. As a thin piece of metal sticking out of your laptop, the antenna itself is an outdated connectivity device, and prone to breakage. Apple’s esteemed and elegant design would be abandoned with the use of this. Although Apple is recognised and celebrated for their great product features, appearance irrefutably plays a part in the MacBook’s success.

With Wi-Fi available at home, in the office, pretty much every coffee shop and even at tube stations, is there really a need for 4G connection? Plus, the current MacBook Pro already enables connection to devices such as your mobile phone, if you wish to access the web via hotspot.  It’s questionable whether Apple will risk ruining a much loved and elegant design for an unnecessary feature.

We’re in for a treat with a sixth generation chip by Intel and Skylake processor. This should further improve MacBook Pro’s browsing and multitasking ability. Currently the 13” model with a battery life of 10 hours and the 15” at 8 hours. We should see a general prolonging of battery life with the new and more efficient processor, and the new launch should bring about a new model with up to 12 and 9 hours battery life.

Apple tends to keep pricing between its different generations in a similar range, so we’re expecting no hugely inflating prices, sad faces or empty pockets. Although, with all the improved and added features, it is unquestionable that there will be a slight increase.

So there you have it! All you need to know about the MacBook Pro release, with all the not so possible features filtered out so you have a better idea of what to expect. If you’re looking to invest in the new MacBook Pro, we hope we’ve been of help to you and if you can’t wait and prefer an existing model, grab yours on our site now.

For more MacBook Pro updates, tech related news and helpful reviews, be sure to visit our blog.