WhatsApp has launched a separate app targeting small businesses to help them better connect with customers.

WhatsApp Business allows companies to have their dedicated business profiles, which contain details such as email address, company introduction, store addresses and website. The free Android-only app also comes with smart messaging functions like greetings, quick replies, away messages as well as statistics for the number of messages sent, delivered and read. Businesses are hence enabled to establish an official presence on the WhatsApp platform – it’s almost like opening up a WhatsApp version Facebook page! 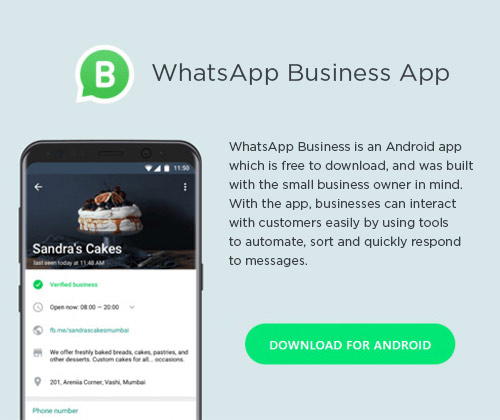 General WhatsApp users will be able to communicate with business accounts and as usual, they are given full control over the messages received from businesses, including blocking numbers and reporting spam. To provide extra security towards general users, businesses are only allowed to send messages to people who provided their phone numbers and agreed to be contacted by the business.

If you own both business and personal numbers, you can install both WhatsApp Business and WhatsApp Messenger on the same device and register them with your two numbers. The new app is also compatible with WhatsApp Web, WhatsApp’s desktop version.

The Business app is a clever move of WhatsApp to address the demand of businesses for its service. Research reflects that over 80% of small businesses in India and Brazil agree that the messaging app, which has more than a billion users, has facilitated their communication with customers and the growth of their business. Unsurprisingly, WhatsApp is planning to increase revenue by charging large enterprises for premium tools presumably created based on the current WhatsApp Business to connect with customers on the platform. According to the messaging giant’s announcement last autumn, WhatsApp Business will later joins hands with an enterprise solution aimed at large-scale, global businesses such as airlines, e-commerce sites and banks.

WhatsApp Business is now available in the UK, the US, Indonesia, Italy and Mexico as a free download on Google Play with a worldwide rollout scheduled in the coming weeks. Although WhatsApp has not mentioned when an iOS version would be released, it is confirmed that the Business app will support other platforms in the future.