Verily has developed an AI algorithm that evaluates scans of the back of a patient’s eye and collects accurate data, including the patient’s age, gender, blood pressure and whether they’re a smoker. The information can then be used to predict an individual’s risk of having a heart attack or suffering from heart disease. This method is not only easier and potentially faster than a blood test, but also almost as accurate as current leading methods!

The scientists trained the algorithm through machine learning by having it analyse a medical dataset of about 300,000 patients. The AI then detected patterns from the data and learnt to pinpoint signs in the eye scans that suggest cardiovascular risk.

It’s been proven in the testing phases that Google’s algorithm is able to acquire 70% of accuracy in identifying heart conditions. When presented with eye scans of two patients, one of whom was diagnosed with cardiovascular disease in 5 years while the other one did not, the algorithm was able to recognise the former 70% of the time. This is almost as effective as the popular but more time-consuming SCORE process, which has an accuracy of about 72% in the same test but requires a blood test. 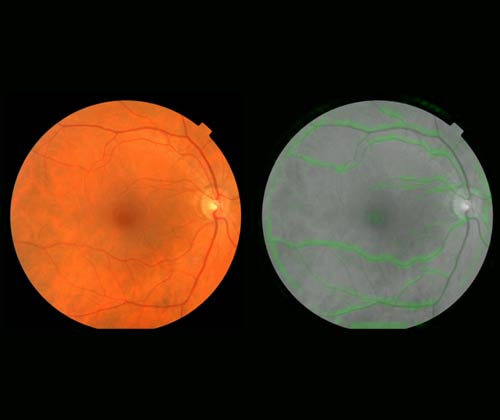 It may sound weird to have your eyes examined in order to evaluate the health of your heart, but Verily’s new endeavour is actually based on established researches and therefore highly credible. Signs of many health issues are reflected through the condition of blood vessels at the rear interior wall of the eye. By studying the appearance of the blood vessels with cameras and microscopes, all manner of insights into cardiovascular health can be obtained.

The new AI is so much more than a new way to assess the risk of heart disease. Google is playing a leading role in establishing new AI-powered paradigms for scientific discovery. Instead of replicating existing diagnostic tools like most medical algorithms, Google’s algorithm found new ways to analyse medical data. It is possible that artificial intelligence can give completely new medical insight without human involvement.

The new algorithm will need to go through more thorough tests to make sure it’s reliable enough to be implemented in a clinical setting. We won’t be able to see AI doctors diagnosing without human assistance perhaps until decades later, but Google’s research has proved that it’s totally possible in the not-so-distant future.

Can you imagine yourself seeing an AI doctor? We look forward to seeing more ground-breaking discoveries from Google!

Keep track of our blog to keep up-to-date with the latest tech news!

Top Technology Trends to Expect in 2020