FEATURED
Why Chromebooks may be the future for schools?
Best Mobile Phone Apps for the Blind or...
Futuristic Features Coming Soon To Smartphones
How mobile phones technology is changing the society?
#BlueMonday: Beating those Monday blues with Laptop Outlet
How to post on Instagram from laptop: Windows...
Best phones under £400: High End Android Phones
Review: Lenovo Yoga Slim 7 14″ FHD Laptop...
OPPO Waterproof Phones
How to take a screenshot on a laptop...
Home MobilePhonesApple iPhone Apple iPhone 8 release date, news and rumours
Apple iPhoneReviews

The much loved brand Apple, infamous for its leading technology with products ranging from phones and tablets to laptops, now has us awaiting the launch of their newest phone; the iPhone 8. Alongside this release, we expect to see the release of an iPhone 7S and an iPhone 7S Plus; so the pressure is on to create 3 new phones. But back to the Apple iPhone 8! We’ve been laboriously searching and seeking to find out what the next generation iPhone will have, so read on to find out more about the Apple iPhone 8!

If you thought the 6 Plus or 7 was big, you’re in for a surprise. The iPhone 8 is expected to have a 5.8 inch screen, with a sensory/usable screen of 5.15 inches. The framing seen around the screen on various models seems to have been abandoned with various blueprint and dummy model leaks. With the framing removed, we’re expecting to see the introduction of an infinity screen or something of a similar appearance. There may be framing along the top of the phone, however none on the sides or bottom; alongside a more elongated shape. If this is true, we see Apple abandoning their signature look that is ever so loved and recognised, and also bearing uncanny resemblance to the Samsung Galaxy 8 which is bound to cause a stir. 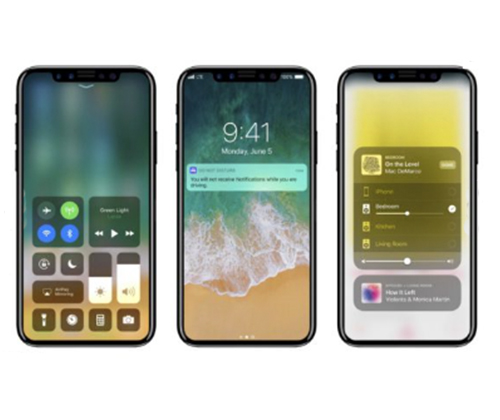 A 3D touch feature is expected to be added to the display screen and is approximated to cost 2-2.5 times more than the previous generations screen feature costs. The Economic Daily News states the iPhone 7 roughly cost $7- $9, whereas the iPhone 8 will cost between $18- $22; all of which has been confirmed by the supplier TPK Holdings.

Alongside this, we see a major upgrade in screen features with the introduction of OLED (organic light- emitting diode). We know it’s a mouthful and sounds very complex, but we’re going to break it down for you. A layer of film will be inserted into the phone screen, this film is electroluminescent so emits light in response to an electrical current. In simple words, it’s going to make screen visuals a lot brighter and more vivid. This type of technology is mainly found in TV and computer screens, but Apple being the leading and innovative brand they are, hope to bring this advanced technology to the palm of your hands by introducing them to phones. However, this layer of film is very delicate and requires glass to be bonded on either side, so again increases the costs. Goldman Sachs, multinational finance company states this feature will add $35 to the overall manufacturing cost. It has also been reported that the outside display and exterior has now been confirmed, so from the various leaked designs floating on the web, we have a pretty clear idea of the new phone’s appearance.

Other rumoured features include the dimension being 143.5mm x 70.9mm x 7.7mm, instead of aluminium there’ll be a curved glass back, or the entire phone exterior will be coated with glass, whilst the inner framing will still be metal. 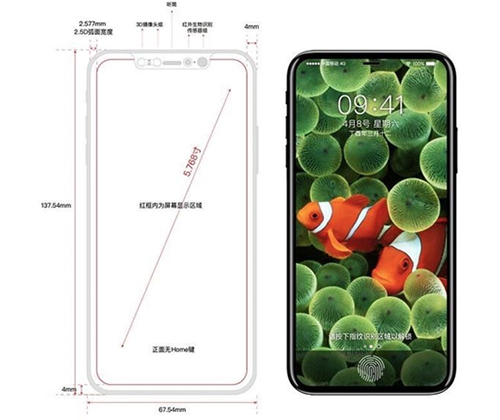 The infinity screen will be accompanied with the abandonment of the home button, which has received both praise and backlash. The fingerprint security feature will still be included, but will be integrated into the screen. This feature is the earliest and most widely reported feature, so we expect it to be almost definite. There has also been recurring talk of a rear fingerprint security scanner, which seems a little strange and unnecessary. Alternatively, the numerous changes to the rear and front camera also spur on rumours of facial recognition as a security feature. However, sources suggest there is more evidence for the integrated fingerprint scanner, rather than facial recognition due to numerous technological setbacks.

The new Apple iPhone 8 will see a different type of battery to its predecessor. The new battery should enable 30% larger capacity and improvement on various other features, the cost is estimated to be $75- $80. There seems to be a running theme of increased costs here, no doubt racking up the overall cost of the phone.

We expect to see changes and improvements on both the rear and front camera. There are rumoured to be dual lenses on either side which are vertically aligned, alongside a built-in iris scanner with the camera. There are also whispers of a collaboration between Apple and LG to create 3D photographing, as well as an augmented reality feature. There hasn’t been a great deal of detail released on these speculated features, but we’re curious to see what happens! 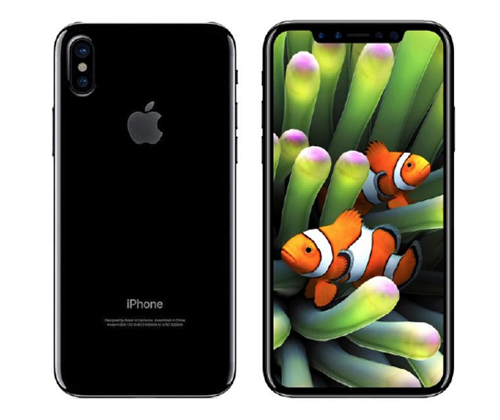 With portable chargers taking the tech world by storm, it was imminent and only a matter of time imminent that wireless charging would be introduced; a rumour constantly surrounding speculation of the new iPhone. There have been rumours or a charging slip or case, enabling speedy charging wherever you are and on the go with ease. However, it’s likely that this will not be included with the purchase of the phone, a normal cable charger will be included and the wireless charger will be an accessory to be bought separately.

The first release date was stated to be in the latter half of 2017, around September, however it seems as though delay is definite. Duetsche Bank state this to be likely due to numerous technical challenges and component shortages. This has also been confirmed by various other sources, as the question is no longer “will it be delayed?”, but more so “how long will it be delayed?”. But fear not, it can’t be delayed for long as various stores are allowing customers to pre-register for the iPhone 8, so we won’t be waiting for too long.

Now, the price. As you’ve probably picked up through the article, Apple are determined to release a premium phone for its 10th anniversary, inevitably raising the price. The estimated price has been placed at $1000/ £785. The price alone has received major criticism, as it’s the most expensive phone yet, which raises questions as to how well sales will do upon release. The latest generation of the MacBook Pro saw a huge increase in price but sales were not affected, most likely due to brand and product loyalty; will it be the same for the new iPhone 8? According to CEO, Tim Cook, iPhone 7 sales dropped once blueprints and dummy models of the iPhone 8 was released. Either way, we’re excited to see what Apple brings out!

For more information on the new Apple iPhone 8, helpful reviews and other tech related news keep track of our blog.