As you may know, Windows 10 is Microsoft’s latest and presumably final OS version. Microsoft has revealed that the upcoming Fall Creators Update will give Windows 10 a number of added privacy enhancements. The update will be available from 17th October and it will feature two important privacy changes to the setup system, as well as allowing users to view more information about data used by the OS.

The most significant features of the update were announced by the company’s executive vice president, Terry Myerson, who stated:

“As part of the update we will deliver an evolution to the photos experience that will let you tell your story like never before using photos, videos, and 3D effects; enhancements in gaming, security, accessibility, and immersive new experiences made possible by Windows Mixed Reality.

All of this innovation will be brought to life by a range of beautifully designed, and feature rich modern devices available from our hardware partners.”

The first privacy change gives users access to the Privacy Statement from the setup system, this change has been put in place to increase user awareness of the data collected by Microsoft. Setting up a new device? The Fall Creators Update will make it a lot easier for you. 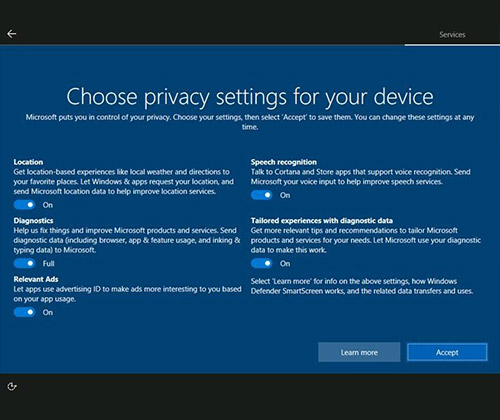 Microsoft has improved privacy settings on the ‘Learn More’ option when new devices are being set up. This allows users to avoid going through the whole privacy statement, and adjust individual settings instead such as the location, speech recognition and diagnostics. With the approaching Fall update, it’s easier to control which apps can access private information on your device, making it safer than ever.

The Windows Devices & Group Privacy Officer, Marisa Rogers, said; “As part of our ongoing dialogue and transparency with you, our customers, I am excited to announce these privacy changes coming next month in the Fall Creators Update. Windows Insiders will get an early look of some of these changes in the coming weeks. I look forward to continued dialogue and hearing your feedback.”

The Windows 10 Fall Creators Update will have prompts appearing for users to enable private location-based information and accessibility to the camera, microphone and contacts. At first the prompts will only appear for the new apps installed after the update, however this particular update means that you will be seeing the dialogue boxes popping up a lot more than before.

Microsoft will begin to test the updates with Windows insiders shortly, before the release of the Fall Update on October 17th. This means that other changes could be made to the OS before its release. Keep up with the latest Windows 10 news at www.laptopoutletblog.co.uk.

The iPhone X: The 10th Anniversary Of The iPhone