Windows has consistently evolved since its initial release in 1985, and has become one of the world’s most popular operating systems – retaining a market share of over 90%. The success of Windows with each generation of software upgrades has led to the release of Windows 10 being highly awaited by many. Here is an overview of Windows 10, to answer whether you should upgrade from previous operating systems.

Here is a list of a few pros and cons of Windows 10:

Windows 10 does already have a number of impressive features, and advantageously Microsoft has also pledged to regularly update the operating system, in order to acquire the best operating system possible. Since the launch of Windows 10, many updates and adjustments have already been put into place by Microsoft, and more are likely to follow.

Fortunately, Windows 10 is perceived as a welcome improvement from the previous Windows 8, which many users had found very unclear and problematic to use. It also made Windows touchscreen devices problematic to use. Windows 10 works best in desktop version, and the new operating system has shifted its focus from touchscreen-use to solving issues from the previous version.

Windows 10 maintains the great performance of Windows 8, which was one of the improvements from the previous Windows 7. Both Windows 10 and Windows 8 are generally quicker than Windows 7, they booted at a quicker pace than Windows 7, and they also shifted in and out of standby faster. 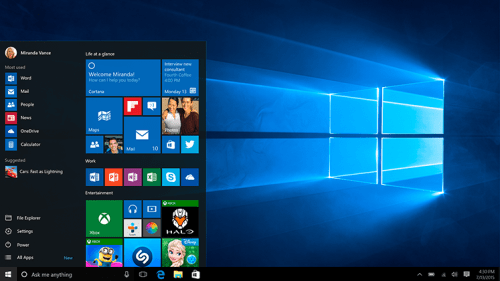 Microsoft has ultimately ventured into the world of Business with the introduction of two free new features in Windows 10:

Mobile Device Management is also a new feature introduced with the Windows 10 operating system, which allows Information Technology to direct the full set of PC, laptop, tablet, mobile and IoT (Internet of Things) in an organisation, offering a stronger method of controlling the different devices, and a better way to control ‘Bring Your Own Device’ (BYOD) situations.

Are you slowly coming round to becoming a fan of Windows 10? If so, check out the Top 6 Laptops, Ready for Windows 10. Be quick to download Windows 10 while it’s free, as Microsoft is planning to charge for the update from July 29th 2016.

Sony is merging its PlayStation businesses under one group: Sony Interactive Entertainment