As the all time famous Star Wars reach its peak, HP plans to embrace it with open arms. HP earlier announced that a new laptop will soon be launched by the company. The look and feel of the laptop will be something that of the dark side. Add to it, the machine will be loaded heavily with rich Star Wars content. This content includes the sound themes of the system that have the ability to take over the entire machine. So when you remove the USB from the port before it is ejected properly, an R2-D2 wail appears. Though it might seem like an annoying thing to many, but users always have the freedom of switching back to the old Windows sounds. 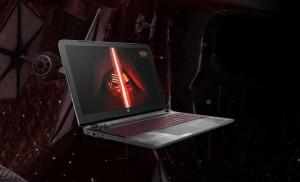 This HP laptop seems to have a dorky design which is so prominent that it does not fail to amuse it’s Star Wars fan base. In fact, the laptop somehow successfully managed to impress buyers with the efforts made by HP and Disney in their attention to details. With plenty of dorky effects by the company when it comes to the machine covered in Stormtroopers images or Aurebash writing, which replaces English, all these effects are far more dopey than any typical gaming rig that you might have, but still the efforts both HP and Disney is what seized the attention.

From the very packing of the laptop to the final view of the machine itself, it’s all about Star Wars. The box in which the laptop is packed is covered with images of Darth Vedar. This box contains a similar smaller box inside which resides all the cables of your machine and whatnot.

The device itself has received a complete makeover of Stormtroppers. The laptop stands as a great shining example of the entire Star Wars Empire. The laptop has been priced $699 and more as the specs go higher. But regular specs include a 15inch screen, 6th Generation Core i5 or an i7 CPU, 2TB of storage capacity, and RAM up to 16GB. It also includes a graphics card – optional – and the usual USB HDMI ports assortment.

Having said that, does one really care about all the specs when the machine itself looks so intriguing and sinister?

WINNER of our #KaptureKazam Competition

12 Things A Perfect Laptop Has To Have – Look Closely