FEATURED
Why Chromebooks may be the future for schools?
Best Mobile Phone Apps for the Blind or...
Futuristic Features Coming Soon To Smartphones
How mobile phones technology is changing the society?
#BlueMonday: Beating those Monday blues with Laptop Outlet
How to post on Instagram from laptop: Windows...
Best phones under £400: High End Android Phones
Review: Lenovo Yoga Slim 7 14″ FHD Laptop...
OPPO Waterproof Phones
How to take a screenshot on a laptop...
Home BrandsIntel The New Ultimate Surface Book Laptop by Microsoft
IntelLaptop PCsMicrosoftNVIDIAStudent Laptop PCs

As of today, Microsoft is also in the running for laptop devices. Just recently, the company announced the launch of its first ever laptop, a new gadget in its line of products. The Surface Book – the ultimate laptop – is one of their latest launches expected to complement their tab, the Surface Pro 4. 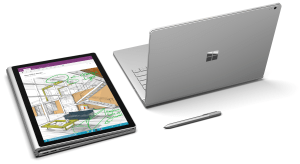 The laptop being slightly bigger than the tablet, the Surface Book features a 13.5 inch wide screen. The device is made of metal. The display is a PixelSense touchscreen that has the capacity to pack within 6 million pixels. Featuring a backlit keyboard, the Surface book is an ultimate thing of beauty that is expected to be faster and far better in performance than the MacBook Pro. Moreover, the best the Surface Book by Microsoft can offer is the long lasting battery life that goes all the way to 12 hours.

The laptop is quite light in weight. Thus when you use it in a tablet mode, you can easily perform all your tasks because it’s not heavy to carry around in comparison to the actual tablet by the company. With a wider screen and light in weight feature, the laptop is the perfect device to buy for all those who want both a laptop and a tablet.

The first thing you have got to recognize in regards to the Microsoft laptop is that it’s gentle. Microsoft put quite a few efforts into making both the keyboard and display components skinny and durable, and for the most part, they’ve probably succeeded. The first full computing device has arrived in the surface household. The Surface Book by Microsoft is a powerful device with a full sized, backlit keyboard for speedy and natural typing. It is quite easy for users to convert the laptop into a tablet. Flip the monitor around and reattach it to use laptop like an A4 size creative canvas. The laptop is also equipped with a Stylus pen that allows you to use it in its full capacity.

Microsoft claims that the Surface Book laptop is quite formidable. The company stated that the laptop features an Nvidia graphics processor that allows users to run some of the most professional known applications like Adobe Photoshop and AutoCAD. This installation is quite impressive by the company in comparison to a number of previously launched high-end Windows operating laptops that included graphic cards which were quite discrete. The Nvidia GPU is a massive achievement in this regard.

Best Picks from the Business Laptop Range for...

If your current laptop is on its last...