Everything you need to know about Android 7.0 Nougat

Google revealed the name of their new operating system around 2 weeks ago “Android Nougat” which was previously only known as Android N. According to Google, the new OS will be out “later this summer” and it will be free. Read on to find out more:

Google have followed their tradition of naming the OS in alphabetical order and after sweet treats since Android Alpha and Android Beta. Since then there was Android Cupcake, Donut, Eclair, Froyo, Gingerbread, Honeycomb, Ice Cream Sandwich, Jelly Bean, KitKat, Lollipop and Marshmallow. 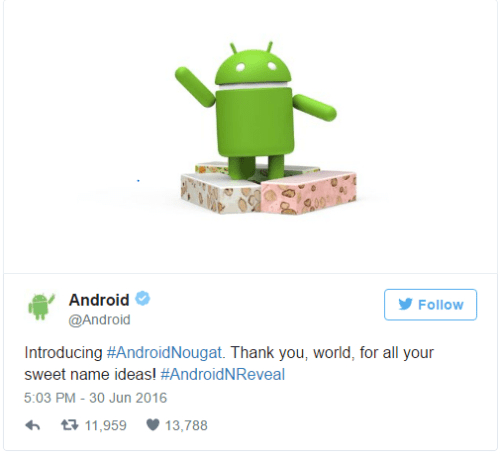 During Google IO 2016 many hints emerged about the Android 7.0 update. Android 7.0 will introduce smooth updates so any future updates by Android will be initiated silently in the background with A/B partition switching. Android 7.0 will also give way to the introduction of Google’s new messaging apps (Allo & Duo). Android 7.0 will aim to cater to demanding VR and gaming apps with the Sustained Performance Mode, and Project Tango and Daydream VR devices will be supported by the OS.

Some of Android Nougat’s best features and improvements from previous OS:

The improved UI is one of the best features of Android Nougat. The notification menu displays this change the most and instant control toggles are available when you swipe down from the top of the screen. Wi-Fi, Bluetooth and other applications can be activated much quicker than previously.

Allo and Duo are the two of the most notable add-ons to the Android Nougat; they are both standalone communication apps.

Allo is a new messaging app which utilises Google’s formidable search and security technologies. It allows users to make quick web searches, as well as providing automatic suggestions to reply to messages. Allo has an ‘Incognito Chat’ feature which provides end-to-end encryptions for messages as well as a Snapchat-style feature which allows you to set messages to expire automatically.

On the other hand, Duo is Google’s new video calling app which can be understood as Google’s version to FaceTime. It has a ‘Knock Knock’ feature which allows users to see a preview of callers before answering. Calls will also be adjusted for usage on limited bandwidth connections with this feature.

Android is known to be great at multitasking already, however Android Nougat has made it even better. The Quick Switch feature allows users to instantly switch back to the last app they were using with the ‘Recent’ button. There will also be a multi-window feature to Android nougat through the ‘Recent’ menu. Android devices tend to have larger screens which will make Quick Switch even more helpful.

Google has extended its VR plans with Android Nougat, which was previously only Google Cardboard. Daydream VR will provide a much slicker mobile VR experience than before. Compatibility will be confined to the brand new Android handsets, however this means current phones will not be able to run it.

When will it be released?

The final release will take place after Preview 5 in Q3 2016.

Although it will be released with Q3 2016, it will only be available on specific Nexus devices; thereafter more updates are expected to take place.

Check back for the latest information on Android Nougat.