FEATURED
Why Chromebooks may be the future for schools?
Best Mobile Phone Apps for the Blind or...
Futuristic Features Coming Soon To Smartphones
How mobile phones technology is changing the society?
#BlueMonday: Beating those Monday blues with Laptop Outlet
How to post on Instagram from laptop: Windows...
Best phones under £400: High End Android Phones
Review: Lenovo Yoga Slim 7 14″ FHD Laptop...
OPPO Waterproof Phones
How to take a screenshot on a laptop...
Home Gaming The New Super Mario Odyssey
Gaming

Nintendo’s the leading brand in the gaming console industry, they basically started it! They produced the first home and portable gaming system and are still bringing out innovative designs to date. Asides from this, their next biggest success was their legendary Super Mario video game franchise. From arcade games and the NES to the GameBoy and Wii, Mario has made over 100 appearances from 1981 to 2017; throughout games such as Donkey Kong, Nintendo Land and Tetris, as well as his own. With the exciting new release of the Nintendo Switch (find out more here), selling more than 2.7 million devices in the first month, Nintendo keep winning. The anticipation and excitement surrounding the new Super Mario game seems to ensure more innevitable success!

As per usual the protagonist- Bowser, nemesis, the arch-enemy since day 1 (1983), kidnaps the beloved Princess Peach and Mario must go globe-trotting on various quests through newly designed kingdoms, defeating lots of bad guys! Save Princess Peach before the rice is thrown and the wedding bells chime and she’s condemned to be Bowser’s wife forever. 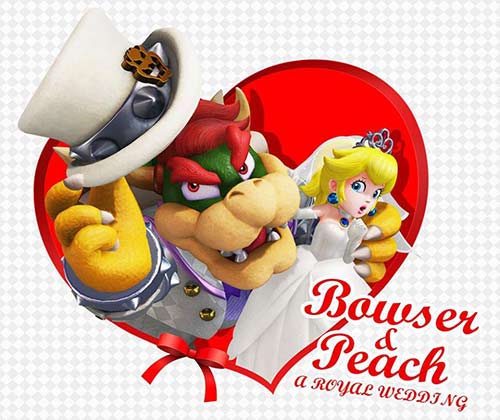 Super Mario games always have a number of kingdoms, all of which vary in characters, challenges, theme and design. After Nintendo’s sneak peak of the upcoming game at the Electronic Entertainment Expo in June, a few kingdoms have been glimpsed and so far we like. Mario Galaxy and Mario 3D focus on smaller and restricted levels, whereas Odyssey is bouncing back with the familiar and much loved style of Super Mario 64 and Super Mario Sunshine.

The most notable and talked about so far has definitely been ‘New Donk’, a spin off of New York. Characterised with civillians, people in work attire, yellow taxis, sky scrapers and commercialised space; some of which is true to exact locations. This was a never seen before design, as this kingdom is contructed in a more life-like fashion, the passers-by looking more realistic, almost Sims like! 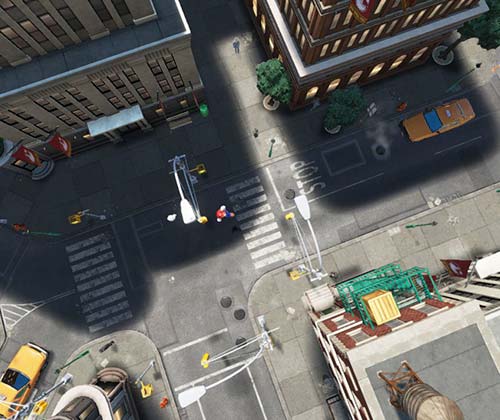 The height difference is definitely the first thing that caught our eye, Mario is almost knee/thigh height of the normal New Donkers. The style of graphic design completely differs, the contrast is insane between facial features and bodily design. Interaction with New Donkers seem to be restircted to a minimum. Whilst Mario jumps and bounces about, passers-by continue as though it’s nothing out of the ordinary.

Shigeru Miyamoto revealed, “I was worried about how players would react to being in a world where Mario is this tall and normal people are a little bit taller…Or the fact that people don’t get mad at Mario when he’s jumping up and down all over the place. But with all that said, I think I realized that the character Pauline has already existed, and the idea of this game taking place in the city worked out really well. And so we ran with it.” (Interview at IGN.)

Whilst there’s a huge contrast, Shigeru seems to have nothing to worry about since New Donk City (and the game overall) seems to be well received by press and gamers. Whilst the stark contrast was initially a shock, it is also pretty mesmerising. Rumours floating around about past Super Mario games being recreated have been put to rest, Miyamoto aims to take Mario in a forward direction as it seems to be a natural path; the evolution of Mario! 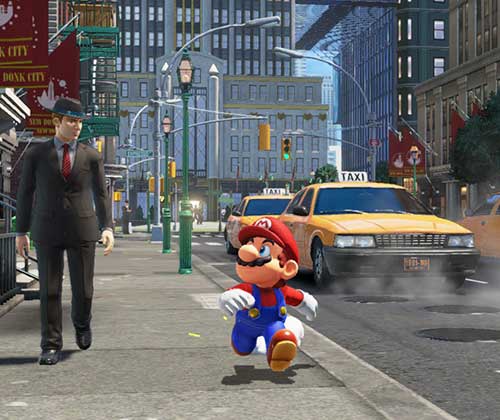 There’s a pop of vibrancy in the Mexican desert town also shown at E3. The kingdom is supposedly called ‘Day of the Dead’ based on the mexican festival Día De Los Muertos. Dating back to the 16th century as an Aztec festival, it looks like Nintendo is giving us an exotic flare and taste of hispanic culture. With skulls and characters resembling the distinguished skull and face paint artwork. 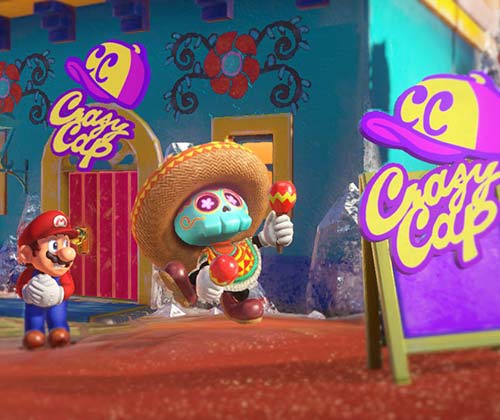 ‘The Wooded Kingdom’ is a fairly dark and unorthodox place; occupied by robots that spin on the spot with one hand in the air, invisible trees and flower paths, redness and decay. So it sounds pretty strange but we’ll try and explain- the robots are spinning because Bowser stole their flowers; yes we know; it still makes no sense! The spooky and decaying region of the kingdom is Bowser’s lair, that part makes sense. The only other thing we know definiteively is that the robots that infest the woodland forest are friendly, E3 revealed Mario to dance with them at one point in the game.

We haven’t gotten a confirmed name yet so we’ll call this next place ‘The Colourful Cooking Beach Kingdom’! It sounds like a fun pop of colour. We’ve got fluorescent pebbles and rocks, creatures with chef hats and fork legs, bowls for Mario to jump in and on. So a beach with a cooking theme. 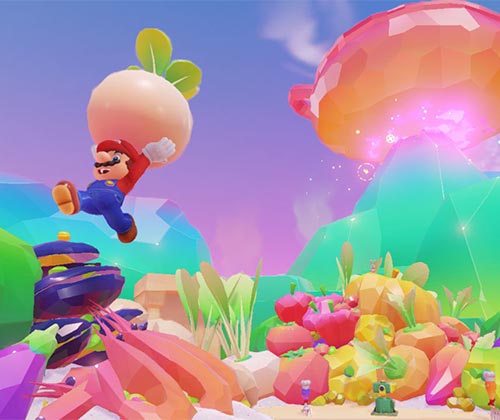 Alongside this, there have been rumours of a dinosaur kingdom, underwater world and an ancient Egyptian kingdom. We’re also excited to see a major throwback, a newly designed 3D kingdom with an old school, 2D arcade version of Mario running wild; pixelated and true to his original form! 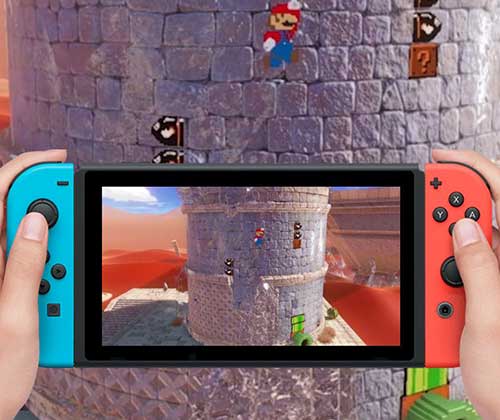 So there’ll be several large kingdoms, all of which are interconnected; Mario fans will be happy as it’s a familiar feel and layout to Sunshine and 64. The various kingdoms are far apart though and require a fair amount of travel, with a newly designed airship. Mario’s airship has red and white stripes, an ‘M’ flag and three large propellers. 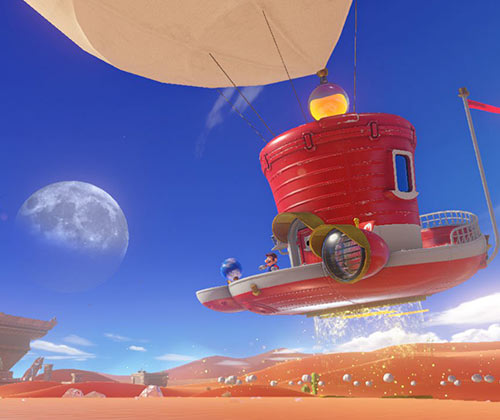 Alongside these intricately designed kingdoms, we’ve got some brand new features and slight changes. The purple coins used to purchase lives and outfits differ in each kingdom, each kingdom will have their own currency. Whilst we’re on the topic of coins and currency, you’ll lose 10 coins if Mario gets himself in a pickle; no more game overs! This new feature has been introduced to stop demotivation for those who struggle a little. Alongside this, if you stuck on a level or in a certain kingdom, there’s way more open access areas encouraging you to explore open worlds. In 64 you had to collect stars, in Sunshine– suns (seems fitting) and now you’ve got to collect moons across the kingdoms to unlock more mysterious worlds. Overall the game is more so advanced than previous Mario games and has been stated to require a higher level of skill required for Sunshine and 64.

Mario’s had a bit of a wardrobe change and quite an expansion. Each kingdom comes with a different outfit, some of which you must wear the costume to complete the level. For now we know there’s a: new hat, mariachi band costume, american footballer uniform, golf outfit, white wedding tuxedo, explorer suit, builder’s costume, swimming suit, safari outfit and an all black suit. You can purchase all these with your purple coins. It hasn’t been confirmed but there’s a whisper in the wind that each costume is suited to each level/ kingdom may be equipped with different skills and powers given the nature of the adventure.

The most innovative and anticipated of Mario’s new skills; hat posession! You can now throw the beloved red cap at a character and possess their body. In addition to this, the hat can be used as a boomerang-like weapon to hit enemies and be thrown at coins to collect them. There are also whipsers of hitching rides on different creatures, it’s confirmed that you can ride a lion in the Ancient Egyptian kingdom.

Nintendo have also reinstated some of Mario’s old tricks seen in earlier games such as; jumping on object like cars and using them like springboards, swinging on lamp posts and signs, jumping and running across rooftops, hanging off ledges and rooftops and shuffling across. 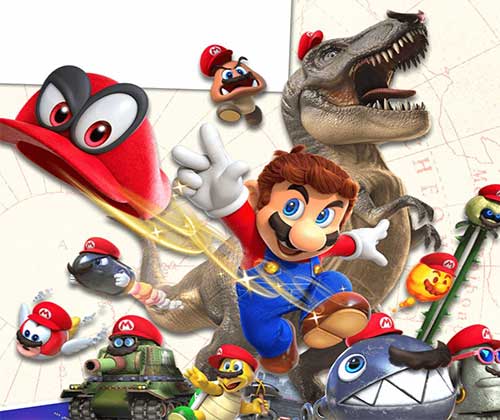 Asides from the infamous cap gaining new powers, it also enables multiplayer mode. This mode is far easier than the lead role of Mario and since Cappy is invincible, this is a great position for younger gamers that may struggle with more challenging adventures. Taking on Cappy lets you fly around protecting Mario, as the cap is not a boomerang-like weapon; or work as a stepping stool/springboard for Mario.

A release date has been confirmed, October 27th, so save the date! Birthday, Christmas or get saving that pocket money. Switch games tend to be higher priced than other console games, so retail price sits at £59.99/ $59.99. Since the agonising anticipation and frenzy of excitement has reached new highs, the game is already available to pre-order, so if you don’t feel like queueing up for 4 hours, we suggest you look into that (many retailers, online and stores are doing it such as Amazon and Game). Unfortunately, given the release of the Nintendo Switch and its huge success, the game appears to be exclusive to the console. There were rumours that this would only be for a short while, until the idolisation of the console finally settled but numerous sources have confirmed that it will not be made for any other gaming console. There are whispers that it may eventually reach other Nintendo devices, but definitely not the Xbox or PS4.

So there you have it, everything you could possibly need and want to know about the new Super Mario Odyssey! Not long until the new adventure begins. Keep up to date with Mario news, upcoming releases, top picks and other tech news by visiting our blog.

Top Android Phones To Buy In The UK 2017

Gaming Trends of 2018: What to Expect

Best Gaming Headphones to buy on this Intel...