At this year’s CES, Korean tech giant Samsung has unveiled a massive 146-inch modular TV – so huge that it’s appropriately called ‘’The Wall’’!

Featuring a micro-LED display that excels in delivering the deepest black and bright highlights, the TV will rival OLED screens from their competitor LG’s flagship products.

If 146 inches isn’t enough for you, the mega-telly’s modular technology will even allow you to customise the size of your TV! The Wall can link up to other units to build a display as big as your lounge and bank balance will allow (!) And we’re not expecting it to be cheap as Samsung’s current 75-inch TVs are around £5000.

Much smaller than current LEDs in TVs, MicroLEDs generate their own light, enabling individual pixels to be turned on and off. This results in higher contrast, richer colours and a more dynamic range. The self-emitting LEDs will be able to produce a bright picture without a backlight, which hinders the creation of deep blacks on screens since its illumination spills beyond the pixels it is targeted at.

These features may sound familiar to you as Samsung had already demoed this technology at last year’s CES. The technology was only referred as a prototype that wouldn’t be seen on any actual product anytime soon however, 12 months later, The Wall is almost ready for commercial sale. 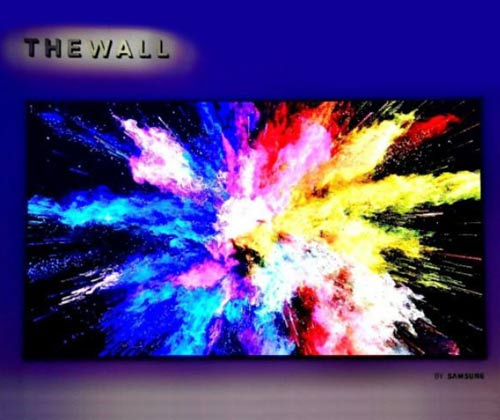 You may think there’s no difference between watching on a projector and on The Wall. Why bother going to the fuss of having an enormous TV? Well, the modular TV’s picture quality is guaranteed to beat what a projector can manage. Just imagine having an IMAX-like experience in your living room! Your home cinema experience will also be more fuss-free – You’ll just have to sit back and switch the mega-telly on without worrying about unfurling the screen, fiddling about with the projector or making sure your room is dark enough for the projector to deliver a good picture.

We’re expecting a huge price tag since MicroLED displays are difficult to manufacture. Each of the LEDs have to be placed onto a layer by machines and there are millions of LEDs in a single screen. Even though Samsung was pitching its monster TV as a ‘’consumer’’ product, it’s unlikely to attract bargain hunters.

Samsung has not yet revealed details on the pricing of The Wall. Its release date is also yet to be announced. Are you as excited as we are?!

Stay tuned for more exciting news and launches from CES 2018!