FEATURED
Blue screen error on Laptop? Here’s how to...
Are HP Monitors best for office use?
Top 3 Lenovo Business laptops in 2022
Why hp laptops are expensive
Best Amd gaming laptops for 2022
Oppo Smartphones – Faster and Smoother
Best Mice for Chromebooks
Best Chromebooks for Drawing and Artist
Best ASUS Gaming Laptops
HP vs Lenovo vs Dynabook: which Brand is...
Home BrandsLG The LG G6: What you need to know
LG

The LG G6: What you need to know

The LG G6 was revealed earlier this year at MWC 2017 by the South Korean smartphone manufacturer and it will soon be available to buy. The reveal created a lot of buzz and it has received a large amount of positive feedback, mainly because it is a big change from its predecessor, the LG G5. LG’s emphasis was also on ‘the big screen that fits in your hand’ and with a 5.7 inch, 18:9 aspect ratio display, it was the justified star of the show.

The G6 comes with an impressive screen and stunning thin bezel, making full use of the size of the phone. This is a welcome change from the G5, which is bigger but has a smaller screen and I’m sure most of us would agree that we would much rather have a smaller phone with a larger screen. It has a resolution of 1440 x 2880 and a Quad HD display making the viewing experience truly stunning. It is also the first device in the world to support Dolby Vision HDR technology, which has previously only been available in high-end televisions, something which makes this phone a real game changer in the world of smartphones.

The new 18:9 aspect ratio screen is taller than other phones that would have the traditional 16:9 screens, which most of us are used to. This means that when the phone is in landscape mode, it is wider. Although the screen is definitely unique, it could mean that this venture away from the normal aspect ratio could leave things on the screen looking out of place.

However, there is a purpose for this screen size, as it means better functionality for the split screen multi-tasking abilities that this phone has, making it even more unique. The LG G6’s FullVision display provides for a truly cinematic experience, and you can expect your gaming experience to be heightened as the graphics take playing games on this phone to the next level.

The LG G6 comes packed with a powerful Qualcomm Snapdragon processor. This means better and faster performance from the G6 as it is around 10% faster than the G5. Considering the new features that this phone has, it is understandable and only makes sense to include an improved processor from the LG G5’s.

Although it does have a faster processor, it also includes better battery life for the LG G6, despite the processor’s speed, letting you fully enjoy the gaming experience on this phone without the worry of the battery draining.

The phone has an internal memory of 32GB and 4GB of RAM, and the MicroSD slot allows you to extend the memory to a massive 2 TB which is more than enough space to store everything that you want on your phone. This makes the G6 stand out from other phones on the market, such as Apple’s iPhone which still does not support external memory.

There are also added options that allow you to adjust things like the resolution, frame and battery needs depending on what you’re using the phone for, adding a more customised feel to the phone.

The G6 also has a non-removable battery, something that is widely unpopular amongst consumers. It means you can’t carry around a spare battery and swap it when you’re running low on charge and when a battery does reach the end of its lifeline, it’s usually more of a hassle and costlier to replace.
Although, the battery on the G6 is supposed to be significantly better than its competitors, as it supports a 3.0 Qualcomm quick charge feature, letting you charge the phone to 50% in just 35mins. The battery also has a massive 3,300 Mah capacity, which is 10% larger than that of its rival, the Samsung S8; this is a welcome change from the LG G5’s 2,800 mAh battery.

There is, however, an upside to not having a removable battery, as it means it will be water resistant, as well as dust and shock proof. With Samsung having the most popular smartphones that are water resistant, this certainly seems like a step in the right direction for LG with the G6 and the added durability will appeal to many. 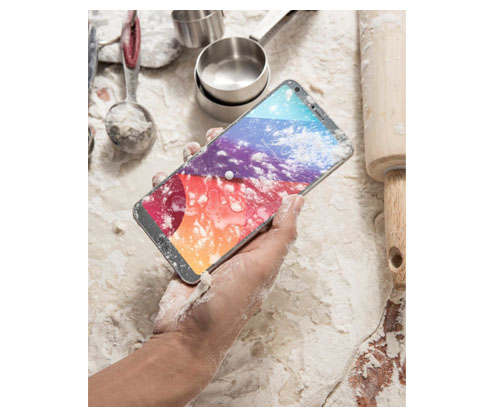 The G6 has a noticeably more masculine look to it compared to its rivals, it has a metal frame and it doesn’t come in a range of colours like Apple’s iPhone with their more feminine choice of colours like the rose gold option. The G6 instead comes in platinum, black and white, that being said, the stunning ‘platinum’ colour does make up for this and brings the glamour.

The significance of the G6, and another feature that makes it stand out are the impressive camera specs. The front facing camera has a wide angle mode and a dual camera on the rear of the phone, one of which is a wide angle lens camera; both are 13MP, making it better quality than the previous G5. Wide angle lens photography has become extremely popular recently so this would please anyone interested in that particular style of photos. 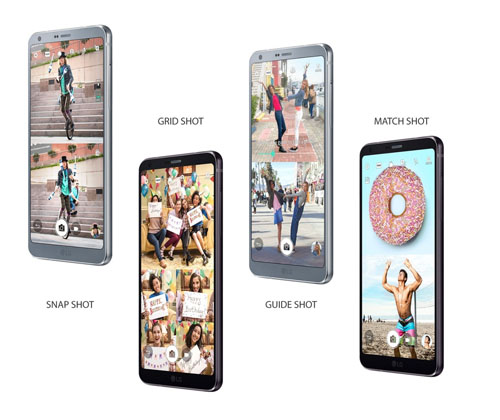 Also on the rear of the phone, is the fingerprint scanner, further freeing up space on the front of the phone. It operates on Android 7 Nougat which is easy to use and gives the phone an attractive user interface which is also customisable. It has Google Assistant built in which is the Apple Siri equivalent for the G6 and makes the G6 the only non-Google phone to have this technology included in it straight out of the box. The split screen functionality also allows for easy multitasking on the G6, something that is unique for a smartphone. 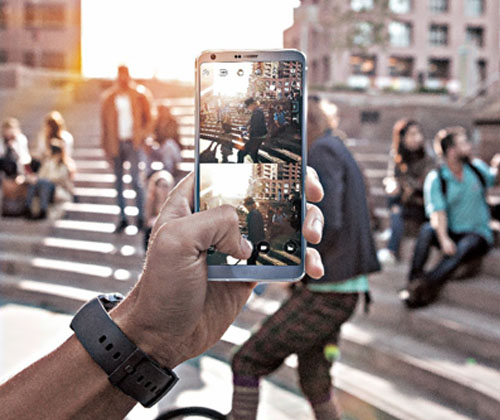 With the likes of Apple and Samsung dominating the market it leaves little or no space for other manufacturers, forcing others like LG to bring their A-game, which most definitely seems the case with the G6. In addition to all its impressive features, it will also come with a game pack which includes $200 of in-game credits for use with amazing titles such as Temple Run 2!

Samsung will be revealing their next Galaxy smartphones the S8 and S8+ in a couple of weeks’ time and it is rumoured to hit stores sometime in April, however, with all of the specs included in the G6, we can expect it to give its competitors some stiff competition. It is clear to see that LG have made a real effort to stand their own in the difficult smartphone market, especially after the underwhelming G5. We are yet to see whether it will pay off, we hope you enjoyed reading, drop us a comment and let us know if the G6 is on your wish list!