Apple have revealed next to nothing about the upcoming and much anticipated Apple Watch 3. Despite the silent treatment given to press and customers from the brand, rumours and leaks have yet again managed to spread like wild fire. From leaked patents to deals with manufacturers hitting the press, we can draw a fair conclusion on some design aspects and features we expect to see. So if you’re considering some new wrist candy with some functional tech features, this might be a watch worth looking into. 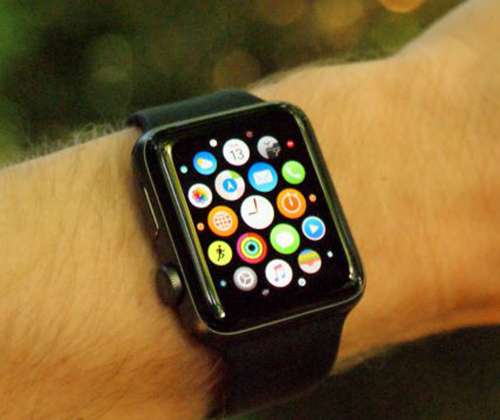 In comparison to the first generation watch, the 2nd was a step up but not by far; the need to charge so frequently was and still is an inconvenience. One of the focal points of the watch is that it provides the necessary contact to the body (in a non-invasive or inconvenient manner) to monitor sleep, but the Apple Watch 2 can’t last through the night. Thus, Apple have pin pointed their efforts into prolonging battery life, especially since competitors offer watches of a similar capability that lasts longer hours.

The upcoming release is expected to handle two days of use before needing to be recharged, so those of you who want or need to track sleep; this might be a suitable smartwatch for you.

Alongside this, we’re expecting to see quicker, easier and more efficient wireless charging.

So if you’re unaware of the growing trend of smartwatches, one of their prominent purposes is fitness. Heart rate and respiration monitoring, sleep tracking, step and calorie counter, activity log and tracker; you get the gist- it’s a great investment for fitness lovers. The focus on these aspects continues so expect new fitness features. A slightly new feature, respiration monitoring is very likely since Apple have patents for such a feature. We’ve heard rumours of a biometric sensor, alongside the likes of speakers and mini solar panels; but take our word for it- very unlikely to happen.

The current model has a resolution of 390 x 312 pixels and competitors offer higher screen quality at a lower price thus fuelling rumours that an inevitable resolution increase is due to come. However, if components move into the straps we’ll have extra space within the watch itself; so we’re even more excited to see what will come.

The introduction of a OLED instead of sticking to the micro-LED screen will see brighter imagery, better power use/ distribution and efficiency. Sources from TPK Holding suggest there’s a high chance Apple will abandon the current glass panel technology and start manufacturing with glass film touch solution.

We might see the introduction of a front-facing camera but realistically- what’s the point? It’s not exactly the greatest angle for taking pictures; a rather disingenuous move from Apple. There’s a chance if this feature is incorporated that FaceTime will be added to the Apple Watch. We’re not very keen on this; the rumoured feature has received a fair amount of criticism. With a screen so small and awkwardly positioned on your wrist, you’re better off using FaceTime on your Mac Book or iPhone. Screen size may arguably stick to 1.65 inches, or perhaps increase in the slightest; but nothing colossal. 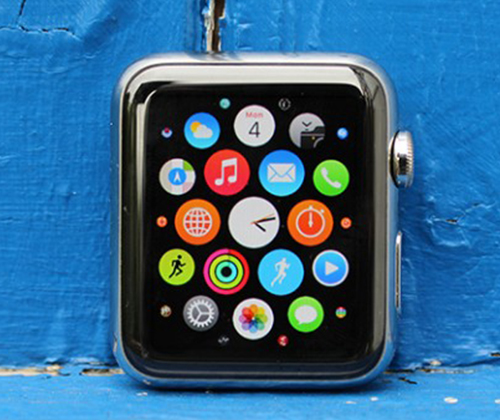 So the 2nd series had a GPS, so cellular connectivity is pretty likely with the upcoming release. The Wall Street Journal is pretty confident that the Apple Watch 3 will have 4G connectivity, if so, the brand will have to figure out how to bill customers if they’re using two devices. The incorporation of this would mean less dependency on our smart phones. Remember how tablets kicked off, took the world by storm, everyone wanted one and manufacturers wanted to make one. Well, various tech giants, economic forecasters and numerous journals predict this product to have a similar effect; and it’s believed that cellular connectivity becoming a feature on smart watches is what’s going to propel the smartwatch to this high level of demand and success.

According to sources, there’ll be an inevitable improvement in the processor chip, overall increasing productivity and performance speed. This seems to be a consistent trend with Apple products, new generations tends to have superior processing power in comparison to their predecessor. Alongside this upgrade, we’re pretty certain on a much needed increase in storage space. The latest version saw a storage space of 8GB, most of which was consumed with the operating system. Subtract this and most were left with a mere 2GB for photos and an insufficient 75MB for music. The expansion in storage space is yet to be confirmed, but it’s a pretty much guaranteed feature.

A very innovative and questionable idea- interchangeable straps. The idea itself is brilliant, you choose a strap best suited for you, you only pay for you need so if this feature does accompany the new release, we should hopefully see some form of a price drop. Alternatively, various economic journals predict this feature to only increase the product’s sale price. The watch face will have the same standard features and like a game, you might have to pay to unlock certain levels, you might have to pay extra to get various other features only available with the watch strap. 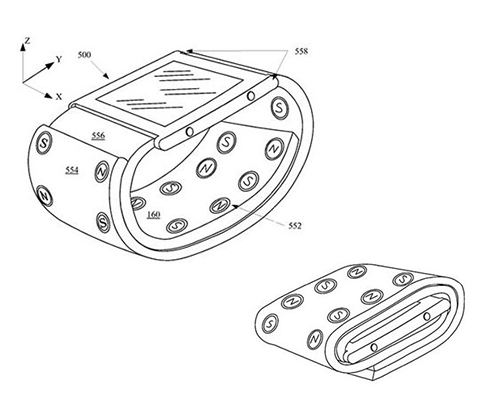 A specific strap that has sparked immense rumours and in-depth scientific research- the health strap. There have been whispers (a lot of them) of a health strap that more focused on maintenance of health rather than exercise/ activity tracking; so for people that are sick. If this strap makes the cut (unlikely) it would have to be FDA approved, so is more likely to be released as an independent product; rather than an additional feature/accessory to the Apple Watch. This would be Apple’s biggest success, it would be untouchable- taking your meds before suffering an asthma attack, no panicking when your blood sugar levels get dangerously low; the implications of a product of such sort would be revolutionary in the medical field. Apple have specifically focused their efforts on monitoring glucose levels within the blood stream thus meaning the current research and the strap itself is tailored to diabetics. At present, the only way to monitor glucose levels is blood sampling, Apple are in the process of developing a non-invasive form of measurement. This in itself is a big deal- it could make getting a blood test for those who fear needles a lot easier. Reports have already confirmed research is underway as CNBC states Apple have been stealing top employees from various medical fields and assembling them in Apple research campuses; leaks have confirmed that specific research into non-intrusive methods of blood testing are in full swing.

It’s confirmed that Apple have filed and been approved for a patent on a magnetic strap. So you can wrap, bend and fold your wristband to make a stand for the watch face (ideal for night stand mode) or wrap it around the watch face for protection when travelling or fit it into your pocket.

The already seen rectangular watch face may be abandoned for a circular shape, which we absolutely despise. It’s just an awkward shape for a tech product, have you ever seen an oval shaped tablet or triangular phone? Some things just don’t work. A round face may arguably cut things off the edges of the screen because of the curve, as depicted below. 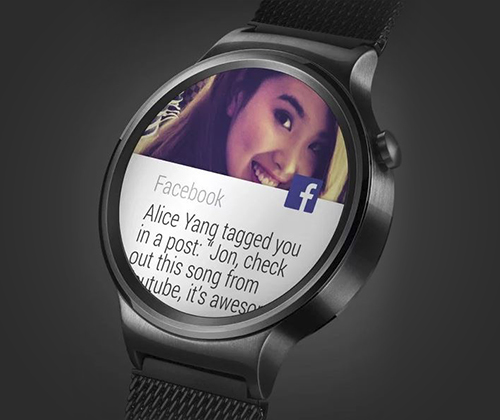 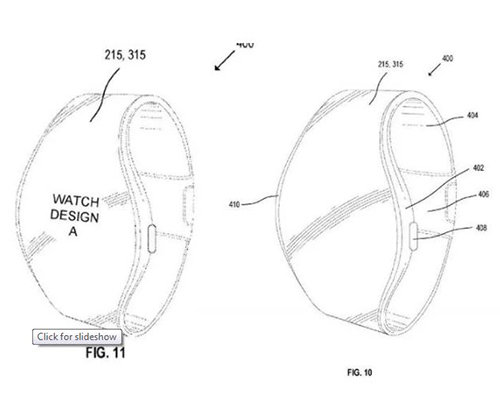 With the focus on sports and exercise, it seems only natural that Apple makes their new watch waterproof, expanding its use to the pool; not just sticking to the confinements of the gym. We’ve seen leaks, heard whispers and read rumours about the exterior. The exterior casing of the watch is most definitely some form of durable metal, either titanium or platinum; catering to athletes who might get rough and rugged whilst training heavily or those who indulge in outdoors sports and activities. We’re expecting a strong exterior capable of withstanding some hard tumbles and falls, alongside elegance; due to the practical and luxurious nature of the watch- it’s handy in the office and catered to those with some cash to spare. A key point of focus however, will be extreme sports such as skiing or mountain climbing; manufacturing a watch able to withstand such climates and activities will be a key player in setting the Apple Watch apart from its soon-to-be mediocre competitors.

So Apple are really teasing everyone, we’ve heard nothing from them directly; only increasing excitement as this is meant to be the golden girl of smartwatches. With the iPhone 8 due to be released in September, there’s a chance the Apple Watch 3 will be launched alongside it. However, the 1st generation and 2nd generation Apple Watch were released over a year apart (1st gen- April 2015, 2nd gen- September 2016), so there’s a possibility we might have to wait till 2018. Shipment of screen panels and other components began in the early latter half of 2017 from their Taiwanese manufacturer, so we’re definitely expecting release in the upcoming 9 – 12 months. Although, there has been chatter of a possible 2S being released first. It has also been rumoured that the new Watch OS4 will be released alongside the Apple Watch 3.

So there you have, all you need to know about the upcoming Apple Watch 3. Those who love fitness that are on the search for a handy companion are sure to be pleased with this piece of arm candy.

For more updates on the release, helpful reviews, top picks and other tech related news- check our blog.

Top Android Phones To Buy In The UK 2017