FEATURED
What is the cheapest and best Dell laptop?
How to use split screen on laptop
The 5 Best 27 Inch Gaming Monitors
Best Dell laptops for office work
Why are Dell Latitude laptops so expensive?
Top 3 Gaming Laptops for Civilization 6 in...
Blue screen error on Laptop? Here’s how to...
Are HP Monitors best for office use?
Top 3 Lenovo Business laptops in 2022
Why hp laptops are expensive
Home BrandsAmazon How voice technology is changing computing
Amazon

The fast emerging expansion of voice technology is transforming computing by providing a natural way of interaction for users. Voice technology allows computers to be more useful than they have ever been, and allows users to operate computers without the need for complex keyboard commands. Controlling computers with the human voice has had issues in the past, with different tones and accents not being understood, however the advancing capabilities of once mediocre voice technology assistants are apparent.

Surprisingly, it’s not smartphones that are leading the way in voice technology – Amazon Echo takes that prize! Amazon Echo is a home-based device which answers to the name Alexa; its features include playing music tracks and radio stations, telling jokes, answering trivia questions and controlling smart appliances.

There is a growing interest in the convenience of voice technology, however it isn’t always enough alone, and the option for users to type is still needed. Amazon has plans to include a built-in screen in an Echo device. Greg Hart, the Vic President of Amazon Echo says:

“The customer response to Amazon Echo has been incredibly positive, and we’ve been working hard to build more as quickly as possible. We are grateful to our early customers for their incredible engagement and for providing us with invaluable feedback to help shape Echo as it evolves—with their help, we’ve been able to add features like Audible, Pandora, home automation, sports scores, calendar, and more. We’re excited to get Echo into the hands of even more customers and continue to invent new features and experiences.” 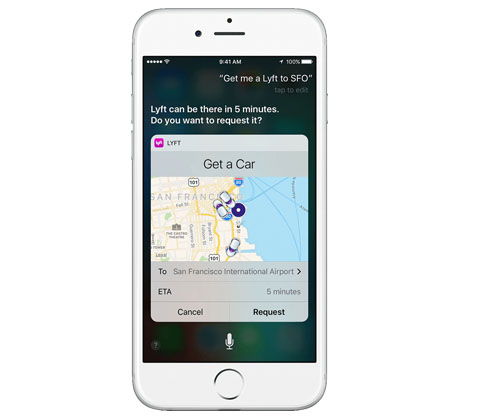 It’s not only Amazon Echo that’s changing the face of computing through voice technology. Apple’s Siri has a massive 2 billion commands every week. Google search is also transforming with the growth of voice technology. 20% of all Google searches on Android headsets are now by voice input. The growth in voice technology is due to it becoming more advanced; users can now dictate emails and texts reliably, a huge transformation from before.

There is also the issue of privacy concerns with voice assistants, because as soon as you vocalise personal information, you’re at the risk of it being available to third parties. Also, many think that Amazon is doing too much with the quickly progressing abilities of Alexa and the drone deliveries. Amazon’s goal is to get buyers to buy more products, so it’s amusing to think that casually mentioning you’re out of something like fairy liquid, would mean that Alexa will have your credit card automatically billed, and a drone will drop it off at your door.

The success of Amazon’s Echo and Siri shows that people are becoming more comfortable with talking to screens. We’re wondering how long it will be before voice assistants can have meaningful conversations with users. Keep up with the latest tech news at www.laptopoutletblog.co.uk